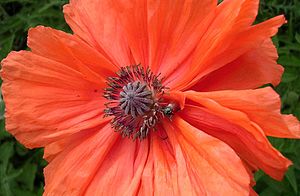 This annual plant, whilst being cultivated in many parts of the world, does have a white variety which grows wild in many places, including eastern England. Most people are under the impression that it is the seed of this plant that supplies opium, but in actual fact it is only the husk of the seed that contains it. However, the rest of the plant does contain alkaloid poisons which can slowly destroy the body by restricting the circulation of the blood, cause irregular respiration, create deep contraction of the pupils, very heavy sleep from which it is difficult to awake, and a very deep thirst. Yet on the otner hand the alkaloid of this plant supplies both morphine and codeine, both of which are now widely used and known in modern medicine, and which can be used on their own or in conjunction with other medicants.